The amount of lending to SMEs through their overdrafts has fallen by 40% over the last four years from £20.9 billion in April 2011, to £12.5 billion in April this year*, highlighting the growing importance of accessing alternative forms of finance says Funding Options, the online business finance supermarket.

Analysis of Bank of England data by Funding Options shows that in the last year alone, the amount of lending to SMEs through their overdrafts has fallen by 11%, from £14.1 billion in April 2014.

Funding Options says that the statistics reflect the continued difficulty many small businesses face when it comes to securing or extending conventional overdrafts from their high street bank.

Funding Options explains that many UK banks have significantly reduced their direct SME lending in recent years. A high proportion have restricted or removed customers’ overdraft facilities. Cost and capital challenges for traditional banks mean that, unlike some other forms of SME finance, overdrafts cannot simply be expected to return as economic conditions improve.

Funding Options says that the problems caused by the shrinkage of overdraft facilities should partly be solved by the new Bank Referral Scheme. This will require UK banks to refer customers who have been denied a loan to providers of alternative finance. The scheme is headed by the British Business Bank and looks set to be up and running by early next year.

“With almost £150 million of vital working capital now being lost to SMEs each month, this new data shows there is a race against time to get the new Bank Referral Scheme up and running. It should be of real assistance as businesses who have been refused a loan often do not understand the huge range of alternatives open to them.”

“Whilst the overdraft has traditionally been the first port of call for many small businesses they are now finding that it does not give them the stable access to funds that they need.”

“We now regularly see banks reducing the overdrafts of small businesses at the peak of their trading year when their borrowing requirement is at its lowest. The result is that when they need the overdraft at an off-peak time, it’s no longer there to use.”

“This has been a real problem across the hotel industry, for instance. Overdrafts are reduced in after peak summer trading when businesses are cash-rich, leading to major problems in the depths of the quiet season around February.”

Lending to SMEs through their overdrafts 2011-2015 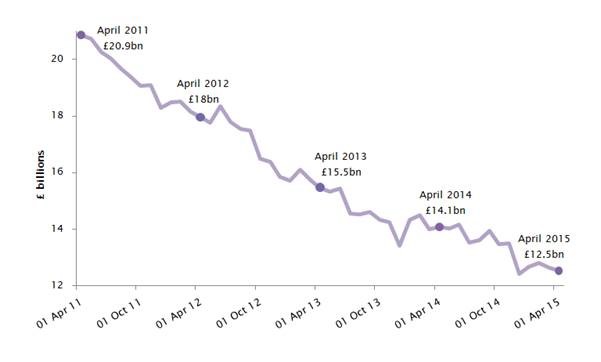 Funding Options, which specialises in matching SMEs to the most appropriate finance provider for their needs, says that a reduced overdraft can place real pressure on businesses’ cash flow. The inability to access extra funds can prove particularly problematic if a business is struggling to meet tax obligations or is hit by an unexpected increase in costs in any given month. It can also delay crucial investment in office space, equipment and staff.

Funding Options says that many businesses are not aware of the alternatives to conventional overdrafts and traditional loans. They need help to compare all the potential options, including asset finance, invoice finance and even crowdfunding, in order to find the best deal for them.

“There is a wide range of choices out there for SMEs seeking funding – invoice finance, asset finance, crowdfunding and peer-to-peer lending can all provide the liquidity businesses need.”

“But businesses often do not know which kind of funding would suit them best, which makes finding the right provider even more difficult.”

“At Funding Options, we’re able to scour our extensive panel of more than 50 lenders across the spectrum to put together a funding package for a business, no matter how complex, urgent or challenging its situation.”

* Figures from the Bank of England